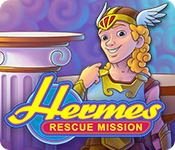 Over time, mankind's faith in the Greek gods faded, allowing Hades to escape the kingdom of the dead and wreak havoc. As the demigod Hermes, you must slip on your winged sandals and lead a team of rescuers across a decimated land in pursuit of your enemy, saving the people you encounter and their homes as you go. Unleash the power of the gods on a quest to defeat the lord of the underworld!